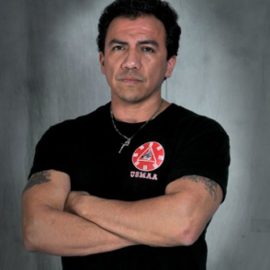 Sifu Gonzalez is the owner and primary instructor of Universal Solution Martial Arts Academy.   Bi-lingual, he graduated with a degree in communications from the University of Mexico in Mexico City.  Immigrating to the United States he continued his study of the Martial Arts excelling in several styles.  Pursuing his dreams he opened USMAA in 1999 where he could teach and share his love of martial arts, weapons, and fitness with others.  He has coached 3 Golden Glove Champions in the USA Boxing League and continues to produce winning fighters in both Western Boxing and Muay Thai Kickboxing.  Sifu Gonzalez awards black belts in Mixed Martial Arts for those who have achieved success and can demonstrate mastery of martial skills in self-defense, weaponry and submissions.

Several of his accomplishments in Martial Arts include but are not limited to the following: